Home › Goddesses › The daughters of Saraswati

The daughters of Saraswati

I recently went for a viewing of the film Girl Rising. It is an inspiring documentary (that everybody should see!) about nine brave young women from different parts of the world. The way these intelligent girls struggle to get an education is both gut wrenching and heart warming. Their journeys are vastly different but the goal is the same. They are all fighting for the right to learn.

How sad is it that this is still an issue in the 21st century?

Watching this movie, and especially the segment on India, made me think about the role of women in India.

Many Hindus believe that there are divinities, or gods, both male and female, who represent every aspect of our lives. We have a God who is the remover of obstacles. We have a warrior Goddess. We have a God of air and yet another of fire. And the list goes on…

Goddesses are usually referred to as ‘Mother’. They are considered to be our celestial mothers. While they are loved dearly there is also a healthy amount of respect shown towards them. After all, who wants to face the wrath of Mother Nature?

One of the most popular Goddesses is the Goddess of knowledge, Saraswati. She is the Goddess that Hindu children, and adults, pray to when they are getting an education. There are a number of prayers and chants dedicated to Saraswati and it is not uncommon to hear her devotees recite these prayers before they take tests and exams.

As a teenager growing up in Mumbai, one of my yearly rituals was getting my pens blessed before final exams. I still remember taking the pens that I was going to use for my exams to the temple. I reverently asked Mother Saraswati to make them powerful. After all, I reasoned, these were the tools that I was going to use to write my exams. Obviously I needed Mother Saraswati to shower her blessings on them!

Similarly, books are another symbol associated with this Goddess. As such, you will find that many a Hindu will be deeply offended if you mistreat a book. Some will be upset if you even place your feet near a book.

Now, since Goddess Saraswati is revered by many in India, one would think that it should be common sense for girls to be encouraged to learn. After all, aren’t women physical reflections of the Goddess herself? Shouldn’t keeping girls out of school be the equivalent of expelling Mother Saraswati from the very books that we revere? Keeping knowledge from women is a colossal contradiction in terms. The mere suggestion that women are not worthy of an education is blasphemy.

Thankfully, India has come a long way. Like the movie Girl Rising demonstrated, there are both men and women in India, who are fighting to give their daughters an education. I just wish that more people would recognize that the best way to pay homage to the Goddess of knowledge is by making sure that her daughters are offered equal opportunities to learn. 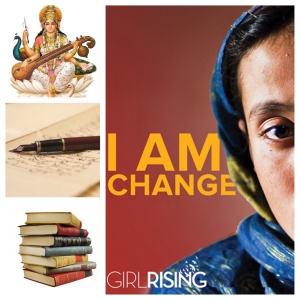 10 comments on “The daughters of Saraswati”