We recently attended a Bollywood dance showcase at my daughter’s university. It is a dance group that my daughter co-founded a few years ago with a friend. I am still amazed that a Bollywood themed club could become so popular in a small college in Virginia. What is even more fascinating is that all of it’s members are not Indians or even Asians. They have students of many colors choosing to learn how to dance ‘Bollywood’ style!

Dance is an integral aspect of most cultures. Is it any surprise then that the Hindus have a god of dance?

His name is Nataraja, which when translated literally means lord, or king, of dance. Nataraja is a form of of Shiva, the God of destruction.

What is interesting is that Nataraja is seen as performing both the cosmic dance of creation as well as the dance of destruction. Destruction is an essential aspect of creation. One simply has to observe nature to understand that without the natural destruction that occurs in the Autumn and Winter one would not experience the beauty of creation and rebirth in the Spring and Summer.

But this idea of creation and destruction runs even deeper for some Hindus.

They believe that Nataraja, during his cosmic dance of destruction, destroys weariness and negative perspectives. It is only then that positive energy can surge through and allow us to rebuild our world again.

However, the concept that resonates even more deeply with me, regarding the symbolism behind this god of dance, is one that I learned early in life. I remember being told that the only art form which did not allow for the separation of the creator, from their creation, was dance.

But, you cannot see, look at, experience or enjoy a dance without the dancer. Dancers are an integral, irreplaceable aspect of their art form.

So also with Nataraja. He represents the undeniable truth that God cannot ever be separated from His creation. He is the dancer and the universe is his cosmic dance. It has a beat. It has rhythm. It has movement. It is beautiful. And it is one with God.

They symbolized what it meant for God and his very many creations to be one. And they did it thru the medium of Bollywood dance. Who would have thought that this was possible in a small town in Virginia, USA? 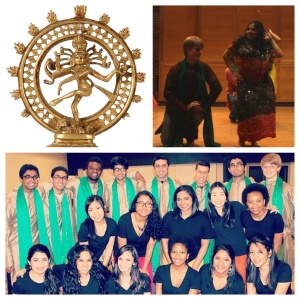 22 comments on “Bollywood dance- a unique force of unity”